Troco project, an experimental peer-to-peer currency based in google wave

Troco is a set of wave extensions that aims to provide a decentralized complementary community currency system, that is, a peer-to-peer currency system. Also you can see it as an IOU or promissory note based system.

Troco is heavily inspired in the japanese WAT and i-WAT Systems.

By now, troco consist only in an experimental (unfinished and yet insecure) wave gadget with a toolbar installer. 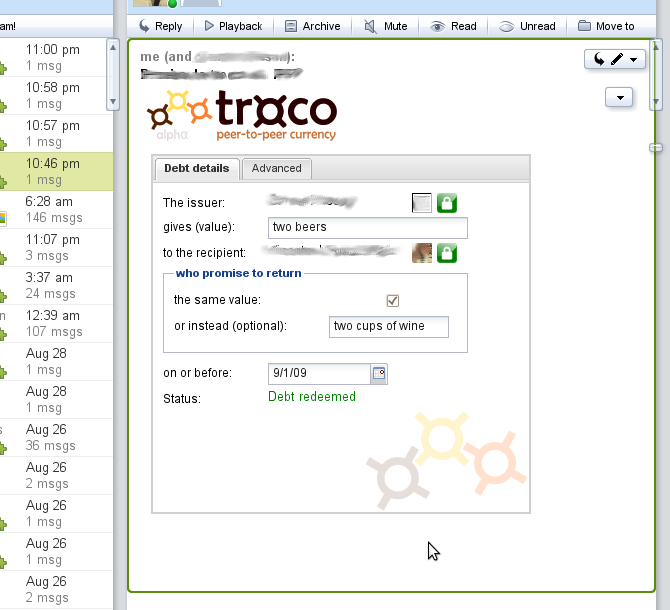 A brief of things to work on / study:

Finally, a quote from Complementary Currencies in Japan Today, 2004:

«Japan isn’t dealing with a “Japanese crisis” as is typically described in the Western media, but rather with a structural world crisis that chronologically happens to have first hit Japan.(...) We can expect the US to follow a similar path of denial particularly in an election year, repeating the mantra that the Japanese have heard for fourteen years: “next year, the economy will be back to normal.” It is under this light that what is going on in Japan in the domain of complementary currencies is relevant for the rest of the world. The second largest economy of the world has turned itself into a real-life laboratory for resolving a variety of economic and social problems from the bottom up, thanks to monetary innovations. Can the rest of the world afford not to learn from those experiments?»

And from the term Currency (typography) in Wikipedia: «The currency sign (¤) is a character used to denote a currency, when the symbol for a particular currency is unavailable.»